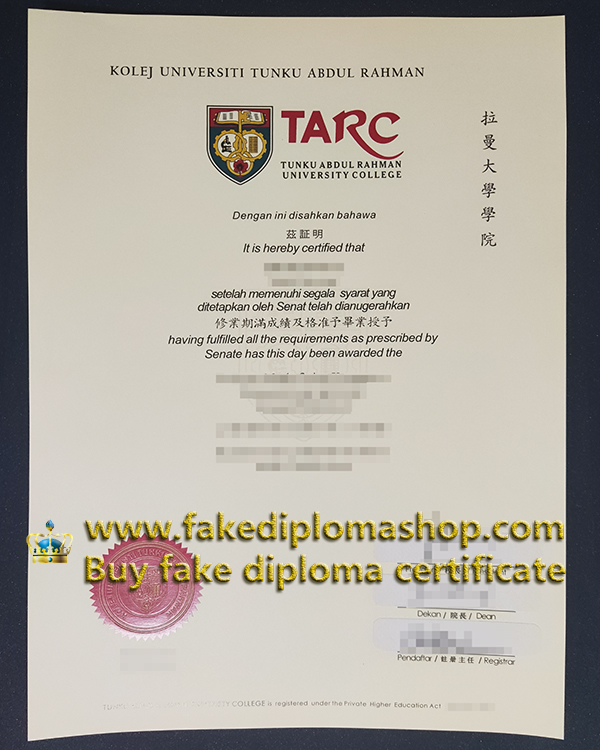 In the early years of Malaysian independence, there was a lack of opportunity to pursue higher education. An institution of higher learning was suggested by Malaysian Chinese Association president Tun Tan Siew Sin. Tan initially suggested the Chinese-language Merdeka University, which was rejected by the government. As a compromise, an English-medium college was proposed. In April 1968, Tan appointed a working team (chaired by Tan Sri Khaw Kai Boh) to make recommendations for an institution of higher learning.

Its blueprint was submitted to the government, and received the support of Minister of Education Mohamed Khir Johari. The working team estimated that it would require RM 20 million to set up the college, and the government agreed to provide the financial assistance on a dollar-for-dollar basis. Prime Minister Tunku Abdul Rahman consented to the college being named for him. TARC degree, Order a fake Tunku Abdul Rahman University College diploma

TAR College began operations on 24 February 1969 with its School of Pre-University Studies and an initial enrollment of 764 students. A 15 September 1972 Instrument of Government provided the legal framework for the administration of the college. Minister of Education Tun Hussein Onn presented the instrument to Tan Siew Sin, the first college president. To raise funds for a campus in Kuala Lumpur, the MCA launched a national fundraising campaign in 1972 led by MCA publicity director Lee San Choon.

In February 1973, the government approved the allocation of land for the main Kuala Lumpur campus in Setapak. The groundbreaking ceremony was officiated by Rahman in August 1973. Phase one, including an administrative building, a library, two laboratory blocks, one large and eight small lecture theatres and a canteen, was completed in 1976.