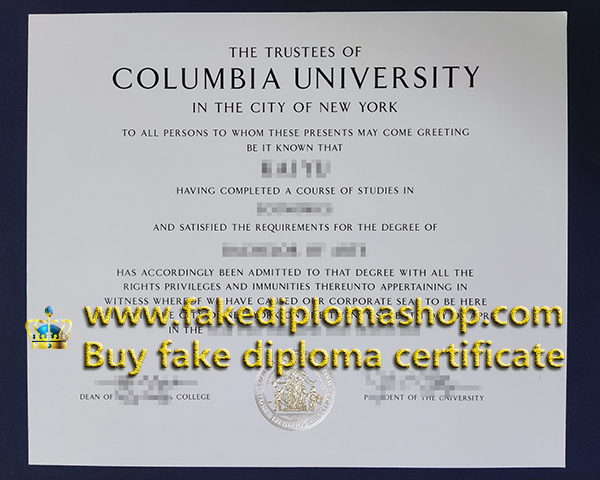 Columbia was established by royal charter under George II of Great Britain. It was renamed Columbia College in 1784 following the American Revolution, and in 1787 was placed under a private board of trustees headed by former students Alexander Hamilton and John Jay. In 1896, the campus was moved to its current location in Morningside Heights and renamed Columbia University.

Columbia scientists and scholars have played a pivotal role in scientific breakthroughs including brain-computer interface; the laser and maser; nuclear magnetic resonance; the first nuclear pile; the first nuclear fission reaction in the Americas; the first evidence for plate tectonics and continental drift; and much of the initial research and planning for the Manhattan Project during World War II. Columbia is organized into twenty schools, including four undergraduate schools and 16 graduate schools.

Discussions regarding the founding of a college in the Province of New York began as early as 1704, at which time Colonel Lewis Morris wrote to the Society for the Propagation of the Gospel in Foreign Parts, the missionary arm of the Church of England, persuading the society that New York City was an ideal community in which to establish a college.

However, it was not until the founding of the College of New Jersey (renamed Princeton) across the Hudson River in New Jersey that the City of New York seriously considered founding a college. In 1746, an act was passed by the general assembly of New York to raise funds for the foundation of a new college. In 1751, the assembly appointed a commission of ten New York residents, seven of whom were members of the Church of England, to direct the funds accrued by the state lottery towards the foundation of a college.

Classes were initially held in July 1754 and were presided over by the college’s first president, Dr. Samuel Johnson.  Dr. Johnson was the only instructor of the college’s first class, which consisted of a mere eight students. Instruction was held in a new schoolhouse adjoining Trinity Church, located on what is now lower Broadway in Manhattan.  The college was officially founded on October 31, 1754, as King’s College by royal charter of George II, making it the oldest institution of higher learning in the State of New York and the fifth oldest in the United States.