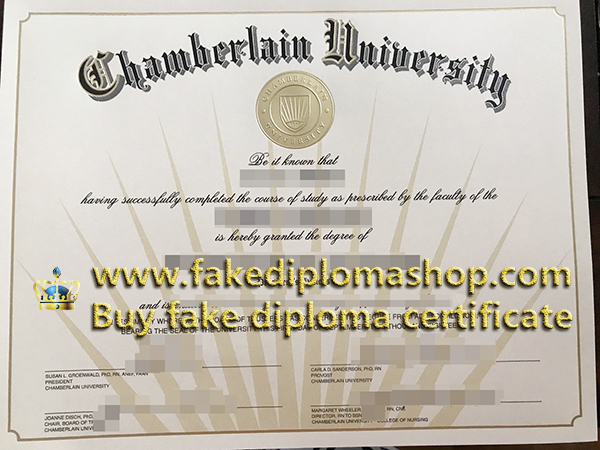 The roots of Chamberlain University are with its predecessor, Deaconess School of Nursing; its related organization, Deaconess Central Hospital; and the Deaconess tradition of service. The Deaconess tradition began in 19th-century Europe when Theodor Fliedner of Kaiserswerth, Germany, established the first Deaconess Home and Hospital in 1836. The word deaconess means “one who is devoted to service”, being the feminine gender of the word deacon. The Deaconess Foundation exists today as a nonprofit organization dedicated to helping children in the St. Louis metropolitan area.

The Deaconess School of Nursing was established in 1943. It was purchased by DeVry (later known as Adtalem Global Education, Inc.) and became the Chamberlain College of Nursing in 2005. It was subsequently renamed Chamberlain University. Its headquarters is located in Downers Grove, Illinois. In 2017, Chamberlain College of Nursing students in Texas protested a new requirement that they pass a comprehensive test to graduate. This followed the Texas Board of Nursing’s decision to forbid Chamberlain from enrolling new students after a significant number of recent graduates were failing the National Council Licensure Examination (NCLEX).